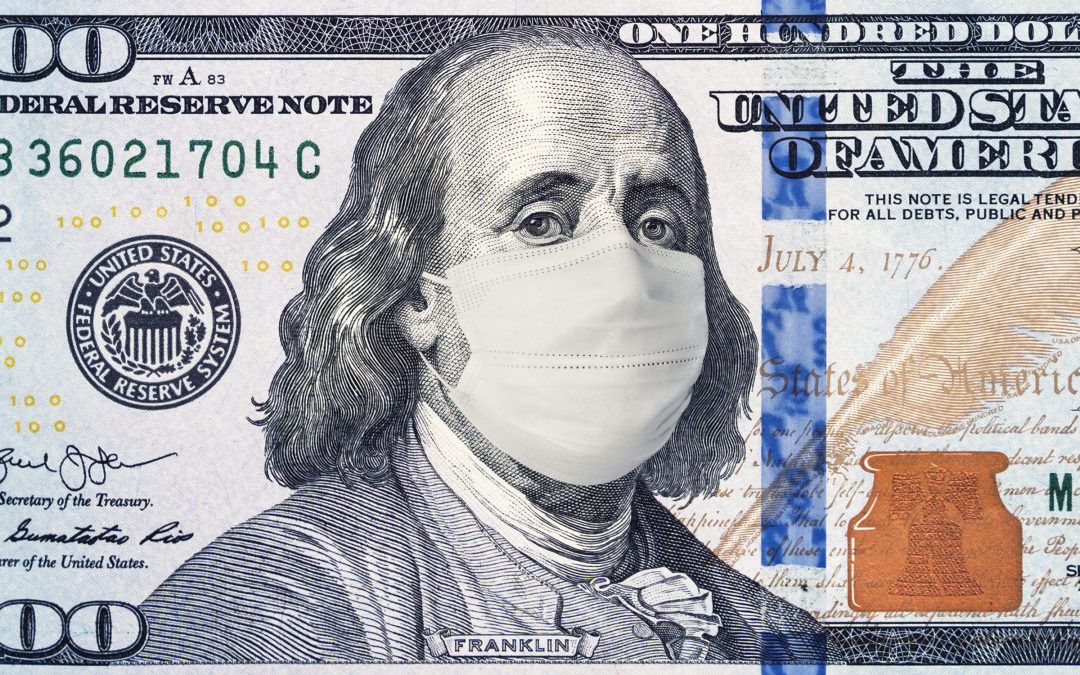 The extent of the damage the invisible COVID-19 virus has created in the world is becoming more apparent and defined each day. Without a doubt, the medical personnel caring for the sick are first-line heroes in this crisis. The sacrifices made for the caring of patients, safety of their families, and for recording data to help researchers understand how to combat COVID-19, are immeasurable.

At the same time, other teams are working around the clock with the same fervor to help minimalize the devastating effects the virus and the shelter in place restrictions will have on the economy.

Community bankers are the front line in supporting local businesses and communities, helping them get access to funds to keep staff on payroll, doors open, and operations running.

Applications were to begin to be processed at midnight on Friday, April 3.

“There were problems, real problems,” shared Kevin Shivers, President/CEO of PACB. “The way the program was written would have hurt community banks – and could have potentially been harmful to their customers too.”

Immediately PACB organized a call with their Executive Committee and the Board. In real-time, all were reviewing, digesting, and discussing what would work and what would not work with the SBA loan program. Everyone’s concerns were heard and addressed.

Within hours, PACB, along with the ICBA (Independent Community Bankers of America) and the PBA (Pennsylvania Bankers Association), was talking with Senator Pat Toomey and members of Congress from throughout the state. US House Financial Services Committee member Blaine Luetkemeyer from Missouri was also on some of the calls.

“The Senator and Congressional representatives really listened to our concerns about the way the program was laid out, including the liability some parts of the program could create,” said Allison Coccia, PACB’s Director of Government Relations. “They were all working together to respond decisively and quickly.”

On Thursday afternoon United States Treasury Secretary Steve Mnuchin acknowledged he had heard community banks loud and clear. Reforms were made to the loan program, including raising the interest rate on the PPP (Paycheck Protection Program) from .5% to 1%, just hours before the application process would begin.

This direct level of connection between the Pennsylvania banking community and the highest levels of decision-makers in Washington D.C. resulted in an SBA loan program that would work for both banks and businesses.

That was only the beginning …

As banks across Pennsylvania altered operations in March to comply with social distancing, personal protective equipment use, and shelter in place guidelines, they made sure they were available to their customers physically and virtually.

New COVID-19 web pages were created to keep customers informed, bank employees were working rotating shifts to be safe, yet available to customers, and IT departments scrambled to allow staff members to work from home on safe, secure connections.

PACB also created a COVID-19 webpage which was updated, sometimes hourly, as the latest information became available. Calls with Congressional and state officials were conducted twice a week, three times each day to express concerns they heard from members and to ask questions about the guidelines.

While juggling this new way of operating and doing business, community bankers always kept their focus on the customer. Before the SBA and PPP loan programs were rolled out, many community bankers reached out personally to see who needed help.

“We called every client to keep them informed about the program,” said Chuck Leyh, President & CEO of Enterprise Bank in Pittsburgh. “We encouraged them to get their applications in even when we were still guessing about the guidelines.”

In Carbon County, Jim Thorpe Neighborhood Bank’s President & CEO, Craig Zurn said, “We returned every call. We were needed to relieve anxiety, show concern for our customers’ well-being, and keep them updated on the process. That was – and is – our priority.”

The process, though, hasn’t been an easy one.

CONNECTING TO THE SYSTEM

As restaurant owners, home builders, HVAC businesses, realtors, marketing companies and other local businesses filled out their applications and gathered the required paperwork, many bankers found they could not access the E-Tran site. (E-Tran is the SBA’s application portal.)

Some approved SBA Lenders found because they had not accessed their account for some time, they could not get into the system. Others had to apply for access for the first time, and due to volume, the site was unreasonably slow.

Even when banks got into the system – it was a tedious process to upload applications and documentation.

At the first notification of difficulty with E-Tran, PACB put together a webinar for members on how to use the system. This was one of the many resources provided, according to Barbara Holbert, PACB SVP of Strategy and Operations.

“We split up membership among our team,” said Holbert. “Each reached out personally with phone calls and emails to listen to what was happening with each bank and their neighborhoods. We made sure we provided response, support, and answers.”

Charlie Crawford, Chairman and CEO at Hyperion Bank in Philadelphia could not get access to E-Tran, “Kevin Shivers personally made phone calls, got me the name of a specific contact, and I gained almost immediate access. It’s great to have PACB as a conduit, along with PBA and ICBA.”

Group calls among members also helped PACB and bankers identify those who could help one another find their way through the maze of government guidelines, access issues, and knowing who needed help in assisting their customers.

Most community bankers handled applications for the first round of loans on a first come/first serve basis. Typically, these were current customers, but no one was turned away. By Monday, April 6, some big banks like Wells Fargo and Bank of America, were no longer accepting applications.

“We saw a lot of new business,” shared Natalie Falatek, first Vice President and Director SBA Guaranteed Lending at Mid Penn Bank located in Millersburg. “We picked up those businesses who had no place else to go. We helped as many as we could and will work on developing relationships with them later.”

John Coleman, President & CEO at Tioga Franklin Savings Bank in Fishtown, PA said, “We had people calling saying, I’m not hearing back from my bank or they hit their cap. After taking their application and explaining the process, they would say, ‘I want to talk with you when this is over – I hate my bank.’”

Coleman believes this crisis was an opportunity for community banks to shine. He told his staff their first priority was getting the community back to work and keeping businesses intact. And they, like many others, worked tirelessly through those two weeks to make it happen.

CONNECTING WITH OTHER BANKS

Despite glitches, in the first round of funding the SBA processed 1.6 million loans in 14 days. That is roughly equivalent to 14 years’ worth of loans.

In Pennsylvania, over $15 billion in loans were delivered to 69,000 small businesses. Whether a PACB member bank issued 50 loans or over 200 loans, all were there to help their customers and each other.

When another local community bank could not handle all the requests coming to them, The Turbotville National Bank in North Cumberland County stepped up. “We did not have access to the system until April 10. We took care of our customers first, but then helped their customers as well,” said William Bussom, President & CEO. “We wanted to make sure everyone in our area who needed assistance, got it.”

Bussom shared that their bank, like others, are concerned about making sure they are providing sound advice about ‘the other side of the program’ – how borrowers need to track and meet guidelines for the money loaned under the SBA and PPP programs. “The peer exchange among CEO’s within PACB is extremely valuable. The constant communication in a very timely manner saves a lot of time and energy on our part. It helps us to understand how these programs will work.”

F & M Trust President & CEO, Tim Henry believes it is an honorable duty to help some of the 22 million people who are without jobs in the United States due to the economic shutdown. “Emergencies bring out the best in people,” shared Henry. “Community banking modeled cooperative assistance in the way the PACB, PBA, ICBA, and banks worked together to help people, businesses and other banks handle this crisis.”

All the bankers we spoke with told us how appreciative their customers were for the guidance and assistance they received. Bankers, in turn, said they could not have done it without PACB and the other organizations.

As the second round of loan applications winds down, PACB will continue to be a sound resource and support system to their members in the recovery effort.

“We’ve provided articles to members on topics like the ‘Top 5 Issues You are Dealing With’ and ‘How to Comply with FFCRA’,” said Barbara Holbert. “We are working with Associate Members on education programs. It’s busy. We’re turning around programs quickly, being nimble and adaptable to serve our members and connect them to the right resources. I call it being wicked nimble.”

Shivers believes the success of the loan program and the survival of small businesses in Pennsylvania will be the true testimony to the work our community banks have put in during this crisis.

Front line work with a wicked nimble response – community banking is doing a lion’s share of the relief and connecting for small businesses throughout Pennsylvania.

Supporting Our Communities: It’s What We Do Every Day 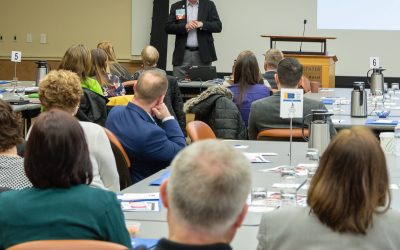 Creating a Path for the Next Generation of Community Banking Professionals